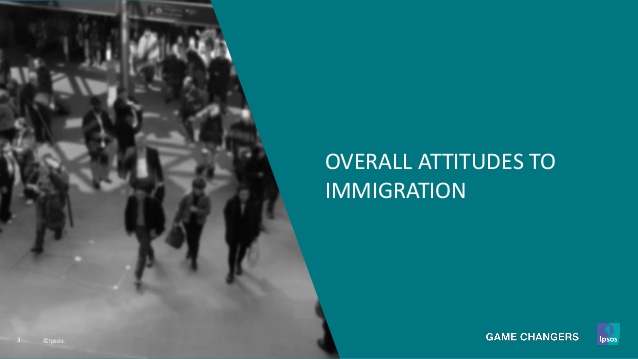 From Argentina, Australia, Belgium and China to Britain, Hungary, India, South Korea and the United States, most people believe that immigration is increasing and has had a negative impact on their country.

New data from the Ipsos Global @dvisor survey shows very clearly that immigration remains a major global concern.   The survey, conducted among online adults aged under 65 in 25 countries across the world, reveals that people are twice as likely to think that immigration is bad for their country than think it is good, and twice as likely to agree than disagree that there are too many immigrants in their country and that this is changing their country in ways they don’t like.

Most countries are also concerned about immigration placing pressure on public services.

And there is a sense that the issue is increasing: three-quarters think there are more immigrants than 5 years ago.

But there are huge differences between individual countries, and significant change in views in some.  Surprisingly, Britain’s view on immigration has increased positively since 2011. We are now the third most likely country to say that immigration has a positive impact on us, behind only Saudi Arabia and India – with 40% saying immigration is positive, up from only 19% in 2011.

On the other hand, Turkey, Italy, Hungary and Serbia are most negative with at least three in five (58%) saying it has had a negative impact.

The more positive attitude of Britain toward immigration surprised me as the media coverage around this issue has been rather relentlessly negative, especially in the context of Brexit.

But Bobby Duffy, Managing Director of Ipsos Social Research Institute, says: “This may be explained by both those who had positive views being encouraged to express them more following Brexit, but also those who supported leaving the EU being reassured that we’ll have more control in the future.”

As the refugee crisis continues, the Ipsos research also shows that a narrow majority still believe they should keep their borders open to refugees, however many still have serious security concerns.

Posted by Veronique Mistiaen at 04:40 No comments: 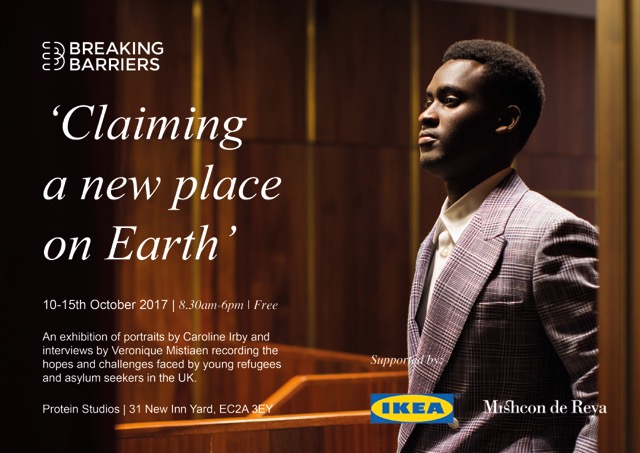 If you are in London this week, please come and see our exhibition “Claiming a New Place on Earth” at Protein Studios in Shoreditch, London.  Through photographs and interviews, photographer Caroline Irby and I have recorded the journey of 10 refugees or asylum seekers aged 18-24, who arrived in the UK as minors and are now coming of age in this country.

How is it to grow up in an Afghan village with no water and no electricity, then to find yourself alone in London at 18, not speaking a word of English?

How does it feel when life is passing you by, when you cannot get your driving license, go to university or get a job because you are waiting for your papers?

Thousands of teenagers arrive in the UK every year seeking asylum. Many have missed out on education and have been scarred by war and by having to leave their home countries.  In the UK, they have to navigate complex systems to get the support they need. Yet, they are also young people with talent, pride, aspirations and dreams.

The young refugees are from Syria, Ivory Coast, Iran, Afghanistan, Nigeria, Pakistan, Ukraine and Uganda. They talk about the life they have left behind and their new experiences in this country - the hurdles and challenges they are facing, especially around the asylum and education systems - as well as their dreams and aspirations for the future.  They were photographed in the context of their dream job.

The portraits and interviews are part of the exhibition “Claiming a New Place on Earth” at Protein Studios in London, Oct. 10-15 (the title is from Lesbos 2015  by poet Ruth Padel). The exhibition was commissioned and curated by Breaking Barriers (BB), a wonderful charity helping refugees to find meaningful employment.

Caroline and I have worked together on a number of humanitarian stories overseas – particularly in Africa and Asia - and in the UK.   We have a keen interest in refugee issues because we have seen some of the causes that trigger people to flee their homes. We wanted to meet some of the young refugees who have settled here to learn what propelled them to move so far, and to hear about their experiences of trying to make a new life here.  And, at a time when Brexit negotiations are pressing on and immigration is such a loaded topic, we wanted to let some young refugees tell their own stories in their own words.

You can see some of the portraits and interviews in this Guardian article.

Posted by Veronique Mistiaen at 02:37 2 comments: