The Tree That Remembers

This weekend I went to “Iran – 21st Anniversary Seminar” in London, a seminar commemorating the thousands of political prisoners executed by the Islamic Republic of Iran in the summer of 1988 and the 72 or more young people killed during the uprising following the June 12 election.

During the seminar, Masoud Raouf, an Iran-born painter and film director/producer who has lived in Canada since 1988, presented “The Tree That Remembers.” In this poignant documentary, he tries to understand what led to the suicide of an Iranian student who was living in Canada as a refugee. The film won the Silver Award for Best Canadian Documentary at the Hot Docs Canadian International Documentary Film Festival in Toronto, the Golden Sheaf Ward for Best Social Documentary at Yorkton and the Bronze Plaque at the Columbus International Film and Video Festival.

In 1992, a young Iranian student hanged himself from a tree on the outskirts of a small Ontario town. He had escaped the Ayatollahs' regime, but he could not escape his past. News of the young stranger's death hit home with filmmaker Masoud Raouf. He too is part of the generation of Iranians who rose up against the Shah's despotic rule during the 1979 revolution, but their hope quickly turned into despair as the equally murderous new regime persecuted them too. Thousands of political prisoners were executed by the Islamic regime in the 1980s in order to eliminate any opposition to the regime. This culminated in the mass massacre of more than 3,000 political prisoners in the summer of 1988.

In the Tree that Remembers, Raouf assembles a group of Iranians - all former political prisoners like himself who were active in the democratic movement. The ex-political prisoners who have been tortured in prison, explain they have to build walls around themselves in order to survive. Their eyes have been opened to the capability of all mankind to inflict the most terrible evil. And this remains imprinted in them for ever. The only way to go on living with this unbearable burden is by sharing their stories, and that’s what they are doing. And that's what a growing number of filmmakers, artists, writers and ordinary people are doing.

Posted by Veronique Mistiaen at 01:12 No comments:

Never Forget Us - In Memory of Iran's Election victims

Just as Amnesty International is sending out warnings that victims of rape and torture by Iranian security forces are facing renewed risk, I’ve received a link for “never forget us,” a moving website documenting 72 confirmed victims killed by the regime for protesting the 12 June presidential election.

“In the summer of 2009, millions of Iranians took to the streets to protest a rigged election,” reads the webpage. “Many were shot, beaten or tortured to death. Despite government pressure, names and pictures of some of the fallen have emerged.

This is in their memory…”

The site opens on a view of masses of people protesting in front of the Azadi tower in Tehran. Some hold placards. On each placard is a photo of one of the 72 victims, and if a photo was not available, a flying bird. If you click on the picture, you can read a short bio of the victim and the circumstances of his/her death. Many were students with their whole lives in front of them, shot dead for participating in the protests or just chanting or only observing.

The list has been compiled from sources including The Guardian, Tehran.stanford.edu, ICHRI and Green Martyrs.

While you scroll from one victim to the other, you can listen to the beautiful and sad “Overture to NeyNava concerto” by Persian composer Hossein Alizadeh. You can also leave a tribute on the site.

Meanwhile, Amnesty International is concerned for the safety of the detained protestors after documents detailing abuses against them were confiscated.

“The Iranian authorities appear more intent on finding the identities of those who claim to have been tortured by security officials than in carrying out an impartial investigation so that the perpetrators can be brought to justice.

“The Supreme Leader must intervene and ensure that there is no cover up of the grave abuses committed against those who challenge the official election result. In particular, he must ensure that victims of rape, torture and other abuses are fully protected against reprisals or further abuse at the hands of those who tortured them.”

Posted by Veronique Mistiaen at 12:20 No comments: 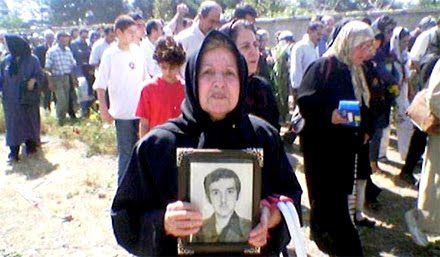 In the coming days, families will gather on a derelict plot next to the cemetery of religious minorities in the district of Khavaran, in south-east Tehran. They call it ‘the rose garden of Khavaran’ – for a rose, in a culture where it is often safer to use poetry, represents a fallen freedom fighter. The Iranian leadership calls it the ‘place of the damned’ or the ‘cemetery of the infidels’. There, in unmarked mass graves, lie thousands of political prisoners killed by the Islamic regime.

Their families have been coming there early September – and at other times - for the past 20 years to commemorate what they call “the national catastrophe” - the biggest and most under-reported state crime in Iran’s modern history. Braving military harassment and sometimes arrest, they return to Khavaran again and again.

In July and August 1988, the Islamic regime had executed in secret thousands of political prisoners throughout the country – men, women and teenagers. They were intellectuals, students, leftists, members of opposition parties and ethnic and religious minorities. Many were jailed for no more than distributing leaflets, having a banned book or being accused by ‘a trusted friend of the regime’.

The slaughter was efficient and relentless. All day long, prisoners were loaded on forklift trucks and hanged from cranes and beams in groups of six at half-hourly intervals. Others were killed by firing squad. Those not executed were subjected to horrific torture. The killing was ‘an act of violence unprecedented in Iranian history, unprecedented in form, content and intensity,’ wrote the US historian Ervand Abrahamian in his book on Iranian prisons Tortured Confessions.

‘When they took me to the death committee in (Tehran’s) Gohardasht prison, the lobby was piled high with sandals, glasses and blindfolds. That’s all that was left of our friends. They are all gone and I am alive. Iam alive to tell their story. That is my only goal,’ says Mehdi Aslani, 52, who survived the massacre and now lives in exile in Germany.

The regime has never acknowledged the massacre, revealed how many were executed, nor why. Amnesty International has recorded the names of 2,800 victims, but survivors believe it was probably between 5,000 and 10,000. The execution of such a large number of people within such a short time, without any due process, violates many international human rights treaties to which Iran is signatory; yet the world has remained largely silent. Most of the perpetrators are still in power today. ‘Nobody has been brought to justice’ says Drewery Dyke, Amnesty’s Iran researcher. ‘Impunity for such appalling crimes only leads to further human rights abuses.’

The husband and two brothers of Rakhshndeh Hosseinpoor, now 56, were killed by the Islamic regime. She now lives in Germany with her son. ‘They have ruined so many lives. I’ve lost three members of my family, but some families have lost six or seven. So many children are without fathers and mothers, so many young widows, so much pain that never goes away... We need justice.’

‘We need people to know about the massacre of 1988 because it isn’t just the problem of the survivors and their families,’ says Reza Moini, another survivor, who works as a human rights activist in Paris. ‘It was a political act, a social act, not a private one. We need the truth for tomorrow’s youth.’

This post is based on an article I have written on the massacre for the New Internationalist. I have researched this topic for many years, gathered lots of evidence and documents, and interviewed a dozen survivors in Germany, the UK, Belgium, France and the US. I have yet to find a mainstream publication willing to run an in-depth article on the 88 massacre.

Posted by Veronique Mistiaen at 10:16 No comments:

Children’s early years are crucial and that is the time when governments should strongly support them. Investing more money on children in the first six years of their lives would reduce social inequality and help all children, especially the most vulnerable, have happier lives, according to the OECD’s first-ever report on child well-being in its 30 member countries.

The report shows that average public spending by OECD countries up to age six accounts for only a quarter of all child spending. But a better balance of spending between the “Dora the Explorer” years of early childhood and the teenage “Facebook” years would help improve the health, education and well-being of all children in the long term, according to Doing Better for Children.

“The crisis is putting pressure on public budgets across the world. But any short-term savings on spending on children’s education and health would have major long-term costs for society,” said OECD Secretary-General Angel Gurría. “Spending early, when the foundations for a child’s future are laid, is key especially for disadvantaged children and can help them break out of a family cycle of poverty and social exclusion."

The report is advocating providing more cash benefits in the pre-school years, strengthening pre- and post-natal services and early childhood education, especially to children in disadvantaged families, supporting breast-feeding and teaching parents the importance of a healthy diet and the risks of smoking.

Many countries concentrate child spending in compulsory education. But often, school systems are not designed to address the problems of disadvantaged children. More of this money should be spent on helping them within schools, through mentoring and out-of-school programmes, to improve behaviour and educational attainment.

Posted by Veronique Mistiaen at 04:21 No comments: