Meet the Queen Mothers of Ghana: taking back their power and driving change in Africa


This summer, we spent a couple of weeks with some truly amazing women in Ghana. They are the Queen Mothers – women who recently reclaimed their ancestral power and are now taking leadership roles in their communities. There are some 10,000 Queen Mothers in villages and towns across the country. They form a remarkable, but little known, network, bringing tangible social and economic development to the country and the continent.

Thanks to a grant from the European Journalism Centre, we (a filmmaker, photographer, TV producer and myself) were able to spend time with Queen Mothers in Lawra Traditional Area, a vast, rural territory in the upper western corner of the country, and in Ho, a town in the Volta region. We wanted to see how Queen Mothers worked at grassroots level. We found strong, warm, charismatic women who managed to accomplish so much with so little.  I often think of them…

Here an article on the Queen Mothers, which I wrote for the Telegraph Magazine, along with beautiful pictures by Nyani Quarmyne.

And for a more immersive experience, watch our multimedia "The Formidable Queen Mothers of Ghana".
Posted by Veronique Mistiaen at 07:57 No comments:

“DECLARATION OF THE RIGHTS OF WOMAN AND THE FEMALE CITIZEN”

These red letters  (in French) on a large poster in the window of the new art gallery rue de l’Odéon in Paris 6th stopped me in my tracks.

I read the poster: it was about an avant-garde woman who cherished freedom and opposed discrimination, violence and oppression in all its forms.  And she wrote the remarkable “Declaration of the rights of woman and the female citizen” in 1791. Her name was Olympe de Gouges.   I am ashamed to say that I didn’t know her.

Intrigued, I stepped inside. The lovely gallery’s manager, Victoria Otero, told me that Olympe de Gouges was a political activist and one of France’s first feminists. Although she was born in a modest family, she found her political voice by writing an astonishing number of pamphlets and posters that she freely disseminated around Paris.  Her pamphlets promoted bold, new ideas, such a total equality between sexes, female emancipation and abolition of the death penalty and slavery.  Ahead of her time, she was guillotined for her ideas in 1793.

The Olympe de Gouges gallery was conceived by a French entrepreneur whose offices were in the old building where Olympe de Gouges lived - on Servandoni street near St Sulpice Church, in the heart of the historic 6th arrondissement. To pay tribute to her,  he not only placed a commemorative plaque on the façade of his building, but decided to open an art gallery a few steps away.

New in the golden triangle of Parisian galleries, the gallery Olympe de Gouges wants to “reinstate Olympe de Gouges,  talk about this woman too avant-garde for her time and pay tribute to her strength and convictions,” says Otero.

The gallery features artists who, like Olympe de Gouges, have a critical view on our contemporary world, fight against all forms of inequality and are not afraid to take risks.  As the art market tends to favour men, they also want to provide a space for women artists.  Exhibitions change monthly, which allows the gallery to showcase a wide variety of artists from all over the world.

Until November 11, the gallery featured the Sino-Irish artist Mia Funk. One of her most famous – and controversial – piece, "An Audience with the Queen" (Price Thames and Hudson 2010),  shows the British monarch and Lucian Freud seated naked on a couch sipping tea and eating Pot Noodles.  The work was meant to be exhibited in Dublin for the Queen’s first state visit, but  had to be quickly taken down following protests.

Their November exhibition will focus on immigration with Marc Bellini, a French photographer artist of Corsican origin, who through herbarium photograms traces the routes of migrants to Europe.

Posted by Veronique Mistiaen at 10:51 3 comments: 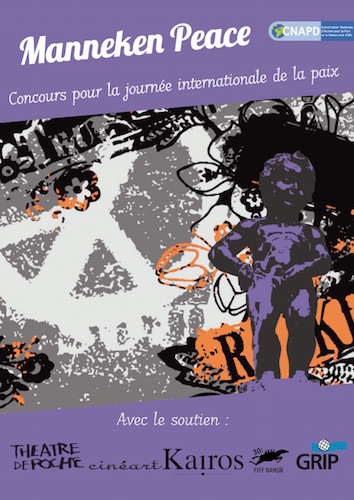