“A Refugee is…” – The Refugee Dictionary

What does the word “refugee” mean to you?

For Maya Ghazal, a Syrian refugee and a pilot, “A refugee is a human being with hopes and dreams like everyone else. A refugee can be anyone, like a pilot flying your plane – a pilot like me!”

And for actor David Morrissey, UNHCR Goodwill Ambassador, ”A refugee is “a boy who had to give up his childhood to provide for his family.”

What is it for you?

To mark the 70th anniversary of the 1951 UN Refugee Convention, on 28 July, UK for UNHCR, the UN Refugee Agency’s UK charity, is asking Britons to help compile a dictionary that will define only one word – “refugee” – but in thousands of different personal, emotive and thought-provoking ways.

The (physical) dictionary with its 1000s definitions of the term “refugee” will be unveiled on 28 July, the day, 70 years ago, when the convention first legally defined the term ‘refugee’ in universal terms and outlined the rights and obligations of women, men and children fleeing the horrors of war and persecutions to seek safety in another country.

Since then, the word refugee has taken on countless personal meanings, so “The Refugee Dictionary” aims to remind us of the rich tapestry of stories and futures made possible because of this significant human rights convention - and celebrate and encourage the UK’s proud tradition of giving refuge by inviting the public to join in.

It is hoped the project will bring thousands of new meanings to the word and highlight that refugees aren’t confined or defined by one word, but are individuals with myriad rich stories, hopes and lives.

UK for UNHCR is encouraging everyone to take part, from those who have sought refuge in the UK or people whose family members were refugees, to those who simply want to celebrate the positive role of refugees in their communities and to the country.

You can enter your definition until July 12th here.

Posted by Veronique Mistiaen at 09:18 No comments:

Award-winning photographer Caroline Irby grew up in London with Juning, a Filipina woman, who stayed with her family for 22 years, first in Hong Kong, then in London.  “I can’t say where Juning’s influence on my early years began and ended: she was in almost every part of my life.”  Caroline says that today no smell is more comforting than the smell of rice, which Juning loved to cook. And it is now her children’s staple.

But Juning had four children of her own living on her native Bantayan, a small island in the Philippines 7,000 miles away.

It was only when Caroline became a mother herself that she grasped the price Juning and her children had to pay. “I can’t shake off a feeling of strangeness that their lives and mine carried on in parallel for all those years, mine with their mother, theirs without. We are all part of the same curious equation, and after decades of living in tandem but remotely, I wanted to try to understand how this all happened and what the effect on the people involved had been.”

The result is “Someone Else’s Mother”, a beautiful and sensitive photo essay, interweaving Caroline's own recollections of a childhood spent with Juning with conversations and photos with Juning and her four children – gleaned in London and over three visits to Bantayan.

I found the book particularly interesting and moving because, although it tells the very personal story of Caroline and Juning and their families, it also echoes parts of the stories of millions of nannies and their host families across the world.

Every day, just from the Philippines, 5,000 people leave their country in search of work abroad. For decades, this movement has been female dominated: more than 70% of Filipino emigrants are currently women.

When she became a mother, Caroline decided to look after her children herself as much as possible, aware that is a freedom of choice Juning couldn’t have.

Juning explained: “I was desperate to earn more money. My children were still young and I left them with my mother. It hurt me when I left them, but I had no choice: I had to work abroad for their education.”

And Roly, Juning’s oldest child, told Caroline when she visited Bantayan in 2018 with her own children:  “I was lonely. Everywhere I was looking for her care. You were lucky, Caroline: you had her care for so many years. I had no one to talk to when I had a problem.”

Juning achieved her goal of feeding and educating her family: three of them have university degrees. Between them, there is a farm, several other homes, nine children, two foster children, and the extended family is well supported. “Quietly, Juning has been a vessel for a huge amount of change.”

Yet, “Someone Else’s Mother” is a bittersweet story with no happy ending. The thoughtful texts and light-infused photography weave together a story of  attachment, loneliness and displacement, love and loss, memory, sadness and hope, guilt and inequality. It is also a story to try to understand.

And nannies and domestic workers all over the world will recognize parts of that story.

The book, published by Schilt in 2020, can be ordered online and from bookstores (and here).

Posted by Veronique Mistiaen at 08:47 5 comments:

I love graphic novels and I love stories told by the people who are experiencing them, so this is my kind of book.

The Book of Homelessness, recently published in the UK, shares the life stories of people affected by homelessness through their own drawings, texts, poetry and photography. Their stories are personal, emotional, raw and honest. They talk about pain, abuse and dysfunction, about families, war, rejection and misplaced love, and  about overcoming difficulties and fighting and succeeding.

By telling their own stories in the form they wanted to tell them, the authors hope to show the complexities of homelessness and what causes it – and perhaps help change perceptions around homelessness. 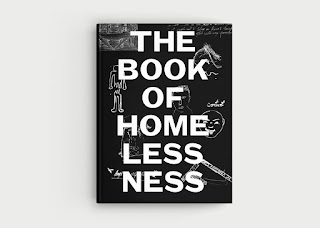 The project is the brainchild of Marice Cumber, founder of youth homelessness charity Accumulate, which describes itself as “the art school of the homeless”.

Accumulate launched a crowdfunding initiative for the book two years ago, and creative workshops with the participants – who were all living in hostels, shelters or temporary accommodation – started last January.

Samantha Morton, herself previously homeless, has written an intro to the book entitled “How homelessness shaped my life”, and Colin Firth has said about it: "This is a remarkable collection in any context. The fact that these beautiful, personal works are the expressions of our neighbours who are homeless makes it untenable to ignore them ever again."

All profits from The Book of Homelessness are shared with its authors and Accumulate so it can continue to provide creative workshops for people who are homeless.

Please visit Accumulate to purchase a copy of the book (£25)

Posted by Veronique Mistiaen at 09:05 3 comments:

In India, 78%of women cannot afford menstrual products and between 6% and 43% say they missed school or work due to menstruation. Even in the UK, a recent report by Plan International UK revealed that 3 in 10 girls struggle to afford or access sanitary wear.

Globally, around 500 million people lack complete menstrual health and hygiene, something the world calls period poverty, according to UNICEF.

Harmful stigma, lack of access to toilets and water, lack of education or not being able to afford tampons and pads cause millions of girls and women worldwide to miss out on education, job opportunities and quality of life. And Covid-19 is making things worse.

Yet, despite growing attention over the past few years, period poverty remains massively neglected.

That a fundamentally basic need can be so challenging in 2020 is astounding. Why is more not being done?

This is a question Dominika Kulczyk wanted to address. She is a philanthropist, entrepreneur and a journalist – and also Poland’s richest woman.

“As a journalist and film director, I have seen the devastating impact of period poverty first-hand. If you are made to feel ashamed of your body, struggle because of the stigma, if you cannot attend school or go to work because your clothes are red, then you cannot participate fully in society,” Kulczyk says.

“Access to complete menstrual health and hygiene is a basic human right. Without it, women and girls cannot pursue full lives with dignity and confidence. It is deeply unfair that girls in all parts of the world miss out on better education, and women on work, because they were too poor to have a period.”

After filming in Nepal earlier this year and seeing women and girls asked to hide in caves and cowsheds while on their period, Kulczyk decided to act.

As a first step, she partnered the KulczykFoundation (her family foundation) with Founders Pledge to produce an extensive report reviewing the current state of funding and solutions to ending period poverty.

One of the report’s shocking findings is that global spending on period poverty amounts to less than 20¢ per woman per year. “It means that the issue is not taken seriously by anyone,” Kulczyk says.

The report highlights eight organizations providing outstanding and cost-effective solutions in different parts of the world, and and what are the next steps for the international community in terms of funding.

“The Kulczyk Foundation’s report highlights this fundamental gendered inequality that persists globally – and serves as a call to action to governments, donors and the world, to take long overdue action on period poverty,” says Marni Sommer, Associate Professor, Columbia University, who contributed to the report.